On Wednesday, 17 February 2021, the EU Centre organized the “Jean Monnet Centre of Excellence-Kyushu, Second Stage Kick-off Symposium” entitled “The Future of Brexit and EU Integration” as an online webinar.
Kyushu University EU Centre was first awarded and implemented “EU Institute in Japan, Kyushu (EUIJ-Kyushu)” (2011–2016) funded by the European Commission, and later “Jean Monnet Centre of Excellence-Kyushu (JMCoE-Q)” (2016–2019) funded by Erasmus+, which is the European Union’s funding scheme to support activities in the fields of Education, Training, Youth and Sport. Subsequently, we have been awarded Erasmus+ again and have started the activities of “Jean Monnet Centre of Excellence-Kyushu, Second Stage (JMCoE-Q2)” from 17 November 2020. For three years until 16 November 2023, we will carry out a wide range of activities in education, research, outreach, and academic exchange while contributing to the globalization efforts of Kyushu University through the further deepening and development of EU research and education.
As the first step of the activities of “Jean Monnet Centre of Excellence Kyushu, Second Stage (JMCoE-Q2)”, this kick-off symposium under the theme of Brexit, the United Kingdom’s withdrawal from the European Union, was held for the purposes of strengthening cooperation with regional EU-related organizations and international exchange organizations for future business development, and to return the benefits of EU research to the community in general.
At the end of 2020, approximately four and a half years after the United Kingdom decided to withdraw from the EU in a referendum, the country finally left the EU. Since the establishment of the EEC (European Economic Community) in 1958, the withdrawal of a member state was experienced for the first time in the history of European integration. The leading speakers on EU integration research and European economic research in Japan were invited. Multidimensional perspectives were provided on the implications for European integration, on the impact on the economies and industries of the EU and the UK, and on the challenges for Japanese-European business.
At the opening ceremony, Prof. Toshiyuki Kono, Executive Vice President of Kyushu University/Senior Vice President of Kyushu University, and Dr Philippe de Taxis du Poët, Managing Director, EU-Japan Centre for Industrial Cooperation/Minister Counsellor, Delegation of the European Union to Japan, gave greetings. In the Jean Monnet Symposium, following the opening remarks by Professor Kenji Iwata (Director of Kyushu University EU Centre), a lecture titled “The UK-EU Relations after Brexit and the Future of EU Integration/ブレグジット後の英EU関係と欧州統合のゆくえ” by Prof. Katsuhiro Shoji (Professor, Law School, Keio University, Jean Monnet Chair ad personam, Director of the Keio Jean Monnet Centre of Excellence) and a lecture titled “The UK and EU Economics after Brexit – a Future Path/ブレグジット後の英国、ＥＵ経済－それぞれの進路” by Ms Sayuri Ito (Executive Research Fellow, Economic Research Department, NLI Research Institute) were delivered.
In the Q & A session, the discussion on “Brexit and EU Integration” was deepened by a wide range of perspectives while questions from general participants were answered. At the subsequent Jean Monnet Seminar targeted broadly to the general public, Mr Susumu Tanaka (Director of the Europe, Russia and CIS Division, Overseas Research Department, JETRO) was invited and delivered a lecture entitled “Changes in the Business Environment of Europe/ブレグジット後の欧州ビジネス環境の変化”. Finally, Ms Machiko Hachiya (Advisor to Kyushu University EU Centre) concluded with a summary of the symposium and the closing remarks.
This symposium was held online as a webinar in the midst of the coronavirus pandemic, and the kick-off event was a great success with the participation of approximately 70 people from all over the country.
This symposium was supported by the Delegation of the European Union to Japan, EU-Japan Centre for Industrial Cooperation, Fukuoka EU Association, The Kyushu Society for EU Studies, Kyushu University Institute for Asian and Oceanian Studies Cultural Variation Cluster, Kyushu University SHARE Office, and Kyushu University Stockholm Liaison Office. 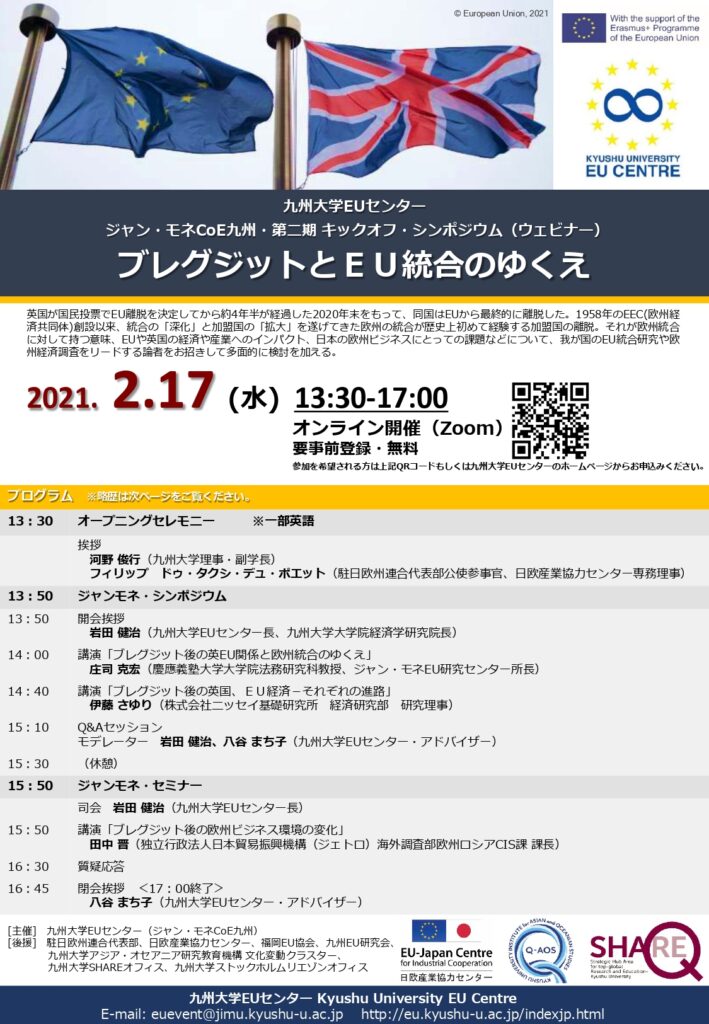 The poster of this event（Please click this picture and open the pdf file.） 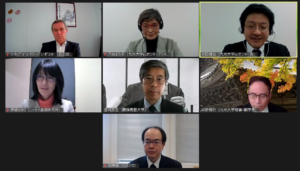