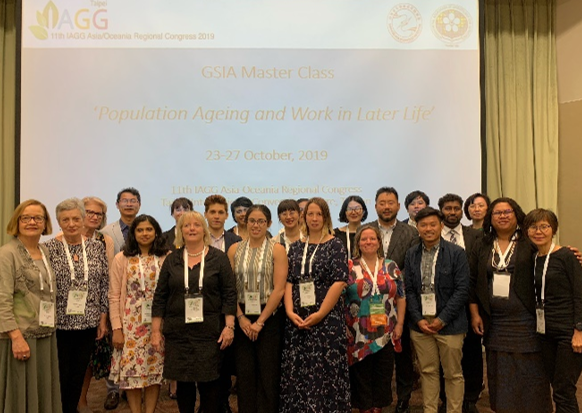 Module Ageing & Later Life (ALL) of Q-AOS Medicine and Health Cluster has already demonstrated its presence in Asia and Oceania – Masa Higo, the module leader, and his module members contributed to organizing and conducting a special mentorship program as an official component of the 11th Asia and Oceania Regional Congress Meeting of the International Association for Gerontology and Geriatrics (IAGG), the world’s largest academic association in the field of ageing studies.

This year, the congress met at Taipei International Convention Center, Taipei, Taiwan, October 23 to 27. The mentorship program, a Master Class Program on ‘Population Ageing and Work in Later Life,’ was proposed to Global Social Issues on Ageing, a theme-based division of IAGG, by Norah Keating, Ph.D. (Professor of Sociology, U. of Alberta, and Director of Global Social Issues on Ageing as part of IAGG), Fiona Alpass, Ph.D. (Professor of Psychology, Massey U., Aotearoa New Zealand), and Kate O’Loughlin, Ph.D. (Associate Professor, U. of Sydney, Australia) among others. The primary goal of the program was to link experts and early-stage researchers in this area of study and then to facilitate mentorship from the former for the purpose of helping to advance the latter’s research careers.

The program started off with several keynote addresses including Masa Higo’s presentation titled “Delaying Retirement in a ‘Hyper-Aged’ Japan: Policy Reforms and Challenges,” which analyzed the role of a series of recent reforms to Japan’s contractual mandatory retirement and its old-age public pension program in reshaping workers’ retirement behaviors. This five-day program was completed successfully as evidenced by positive feedback from the participants including Masa Higo’s mentees, Deepani Siriwardhana, Ph.D. (Lecturer, U. of Kelaniya, Sri Lanka), Kotalo Leau (Doctoral Student, Massey U., Aotearoa New Zealand) and Christoph Niesel (Doctoral Student, Queensland U. of Technology, Australia).

Back to all events