The Hedge / Round 2 "Group Psychology Learned from Conflicts" 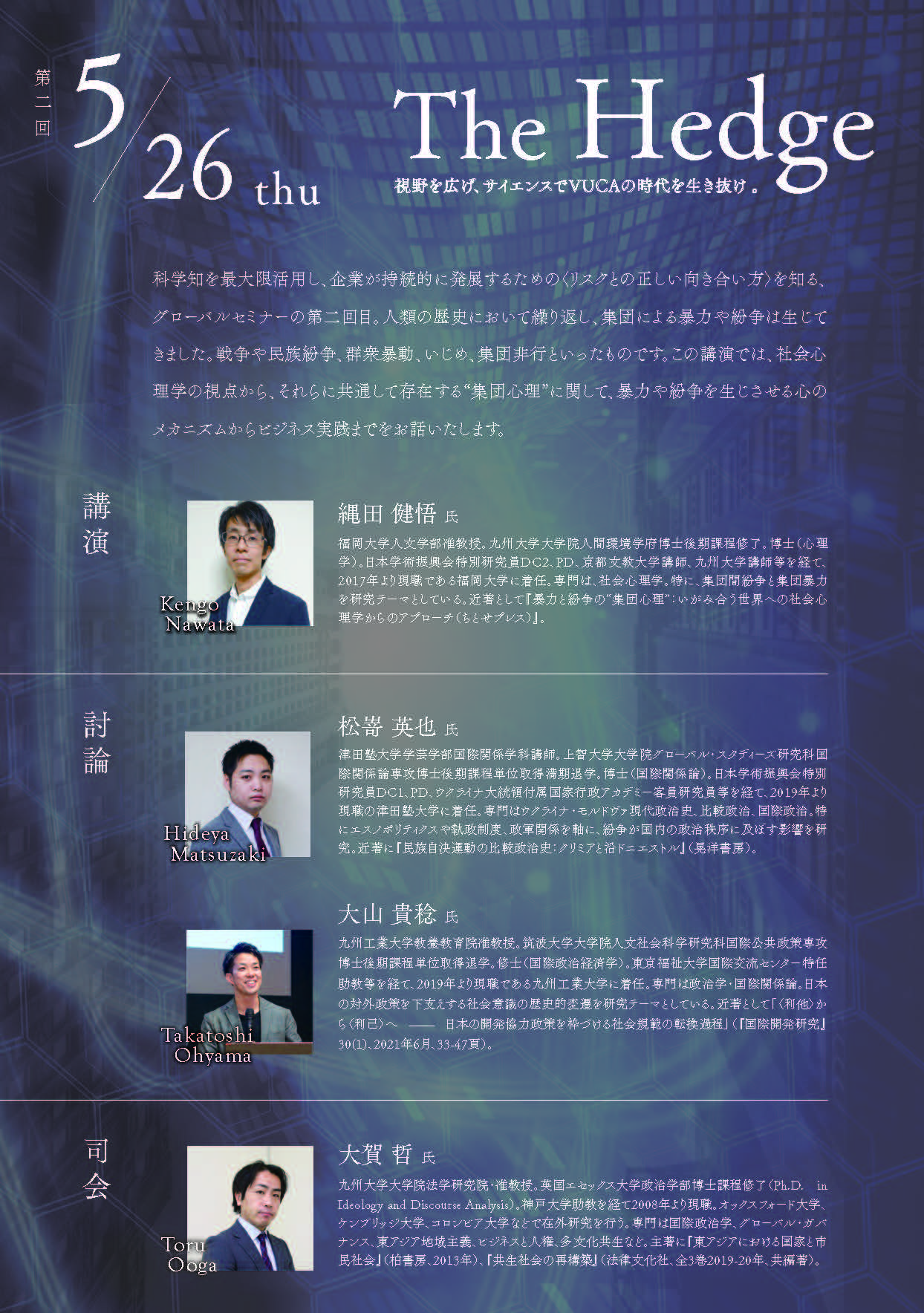 "In this second session, we will discuss "Group Psychology Learned from Conflicts" with reference to the situation in Russia and Ukraine.
We will talk about group violence and conflicts that occur repeatedly in human history, and from the perspective of social psychology, we will discuss the "group psychology" common to these conflicts and the mental mechanisms that give rise to them.
Experts on Ukrainian and Japanese politics will also be invited to discuss the current situation in Ukraine in more depth, making this an opportunity to kill two birds with one stone, not only in organizational management, but also in acquiring recent information in a more understandable way.

Associate Professor, Faculty of Humanities, Fukuoka University. D. in Psychology from Kyushu University. D. (Psychology). After working as a JSPS Research Fellow DC2, PD, Lecturer at Kyoto Bunkyo University, Lecturer at Kyushu University, etc., he assumed his current position at Fukuoka University in 2017. He specializes in social psychology. In particular, he focuses on intergroup conflict and group violence. His recent book is ""Group Psychology" of Violence and Conflict: Approaches from Social Psychology to the World of Warring States" (Chitose Press).。

Lecturer at the Department of International Relations, Faculty of Arts and Sciences, Tsuda College. D. in International Relations, Graduate School of Global Studies, Sophia University. D. in International Relations. After working as a JSPS Research Fellow DC1, PD, and as a visiting researcher at the Academy of National Administration attached to the President of Ukraine, he assumed his current position at Tsuda College in 2019. He specializes in Ukrainian and Moldovan contemporary political history, comparative politics, and international politics. His research focuses on the impact of conflicts on the domestic political order, with a particular emphasis on ethnopolitics, regency systems, and political-military relations. His most recent book is a comparative political history of the national self-determination movement: Crimea and Primorskiye Dniestr (Koyo Shobo).

Associate Professor, Faculty of Liberal Arts, Kyushu Institute of Technology. D. in International Public Policy, Graduate School of Humanities and Social Sciences, University of Tsukuba. Master's degree in International Political Economy. After working as a specially-appointed assistant professor at the Center for International Exchange, Tokyo University of Social Welfare, he will assume his current position at the Kyushu Institute of Technology in 2019. He specializes in political science and international relations. His research focuses on the historical evolution of social consciousness that underpins Japan's foreign policy. His most recent book is "From 'Altruism' to 'Selfishness': The Shifting Process of Social Norms Framing Japan's Development Cooperation Policies," International Development Studies, https://srust.co.jp/, 30(1), June 2021, pp. 33-47.

Back to all events
Click here for the application form